What Does Neck Pain Say to Your Ams?

Neck pain is a common pain condition, and one frequently treated by chiropractors. While patients who suffer from neck pain as a result of whiplash or other injury often are most concerned with recovering the full range of function in their neck, researchers are beginning to uncover how neck pain may impact other areas of the body, including the upper body and arms. A number of studies have shown that spinal misalignment can affect the neurological pathways that create proprioception, the body’s ability to sense the relative position of its parts.

In a recent study published in the Journal of Manipulative and Physiological Therapeutics, researchers based at the New Zealand College of Chiropractic investigated the neurophysiologic connections between neck and arms, and how misalignment in the neck might interfere with this connection. They also explored whether spinal manipulation, as performed by a chiropractor, might restore some of the communication between the neck and arms.

The study participants included 25 volunteers with a history of untreated neck pain or stiffness and a control group of 18 volunteers with no such pain history. Among the 25 participants in the treatment group, 14 had experienced whiplash or other head injury. Most of the participants were recruited from a local university and college area, and the average age of volunteers ranged from 23 to 25. 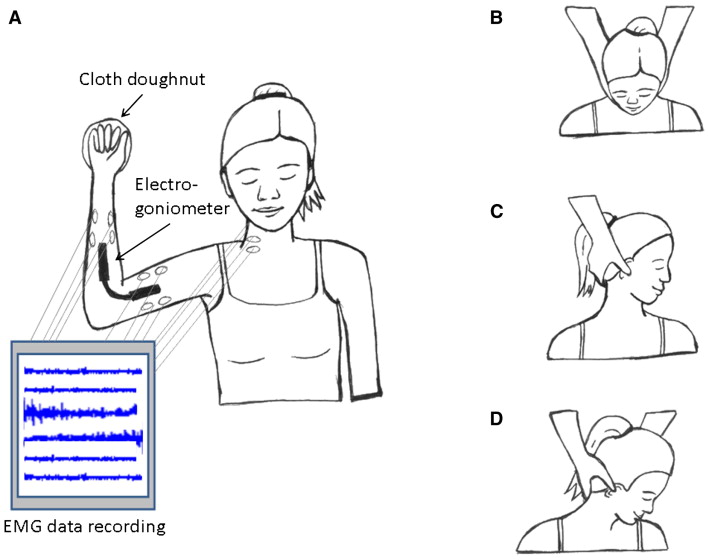 Each volunteer received an initial assessment from a licensed chiropractor who noted any apparent spinal dysfunctions that might limit the patient's range of motion. The researchers then measured each patient’s ability to accurately position his or her elbow, using the following method (see image A): As the participant lay on his back with eyes closed, the researcher positioned his right arm pointing up at an 80° angle, identified this as the target angle, then repositioned the participant's arm to a new resting angle between 70° and 110°. This experiment was repeated with the participant's neck in different positions (facing front, turned to each side, and pointing down, see images B-D). The participant would then be asked to move his arm back to the original position. Arm positions were measured through sensors attached to an electrogoniometer. The researchers found that the group of patients who reported past neck pain were far less accurate in repositioning their elbows than those with no history of neck problems.

The patients in the treatment group then received a session of spinal manipulation that consisted of high-velocity, low-amplitude thrusts, while participants in the control group took a 5-minute rest period. After these treatments, all the volunteers went through another round of positioning and repositioning their elbows.

Participants with a history of neck pain, who had as a group performed poorly in the initial tests, significantly improved their ability to accurately position their elbow joints after the chiropractic treatments, while patients who had instead rested were less accurate in their joint positioning during the second round.

These findings suggest that spinal dysfunctions may impact the body’s proprioception, especially of the upper limbs. More importantly, the researchers found that this disability could be improved with just a single chiropractic adjustment session. The study lends credence to the notion that chiropractic treatment can be helpful not only in reducing immediate pain symptoms, but in restoring neurophysiological connections throughout the upper body.